One Saturday last June my daughter and I wandered into the Church of Santa Maria della Vita in Bologna, Italy.  We were killing time as we waited to meet friends (my daughter’s Italian language tutor, actually) for lunch and a quick tour of the public library before heading back to Venice.

That morning, after arriving by train from Venice, we had savored cappuccini and croissants  and then toured the main attraction in Bologna, the Basilica de San Petronio. We spent about an hour there marvelling at the centuries-old church with the unusual brick and stone facade. Plan to read a future post on that experience soon, but here’s a taste.

We had also explored the Piazza Maggiore with its beautiful Fountain of Neptune and saw the city “square” rigged and ready with row upon row of temporary seating for hundreds plus a huge movie screen. Among other movies, Gone with the Wind was on the menu at some time during the summer season. How fun would that be?!

In our hour or two of free time, we also strolled down beautiful loggia-lined avenues. Eventually, we happened upon a church, the Santuario di Santa Maria della Vita.

It’s the copper-domed church in the large photo at the top of this post. While it’s quite a standout in a Bologna skyline photo, at street level it’s easy to miss. Tall buildings and narrow streets together conceal your vision of things in the upper reaches.

It was a warm and achingly brilliant sunny day. Taking a short break in a quiet place of worship enticed us to escape the Italian noonday rays.

Inside, sounds of the street faded to a cavernous quiet. The majesty and somber tone of the interior both cooled and stunned me. 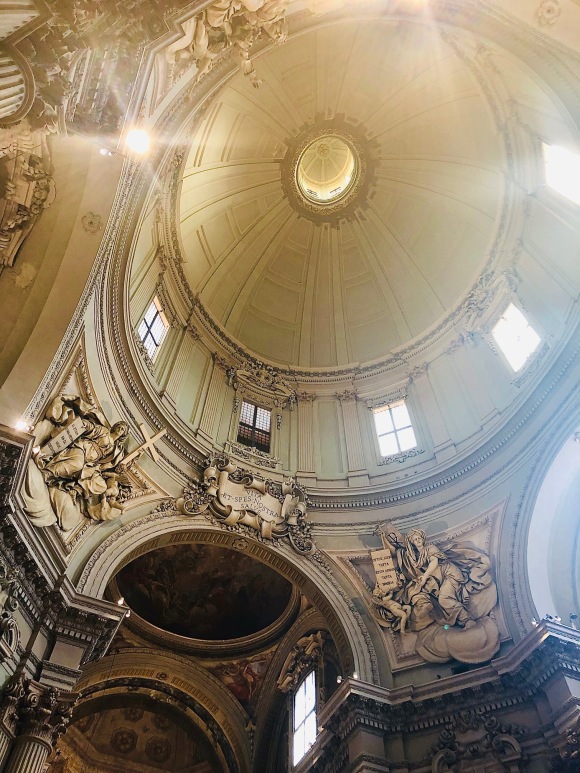 But if only I had Googled to see what more this structure had to reveal.

Because here’s what we didn’t see: Lamentation Over the Dead Christ by Niccolò dell’Arca (1435-1494). Italy Magazine describes the work as “A life-size group of six separate terracotta  figures lamenting in a semicircle around the dead Christ.”

I stumbled upon this sculpture as I was researching the church and I still can’t believe that I was in this very building and missed this very powerful example of Renaissance art.

I can’t get over the expressions on the faces.

Truth be told, I often feel detached from historical art. The expressions are often glum and sullen, especially in depictions of Jesus Christ and the suffering he endured on the cross. That goes, too, for the the emotional suffering of those nearby who loved him. Sometimes it’s just hard to identify.

With Arca’s work, however, the emotions of the figures are real and painfully so. I understand that kind of hurt and sorrow and panic. We see humans in painful grief daily on the news and in our modern media. To think that an Italian Renaissance artist was able to capture it accurately — in terra cotta — six hundred years ago — baffles my small mind.

Words are not needed in the picture below. The emotion is palpable and horrible. 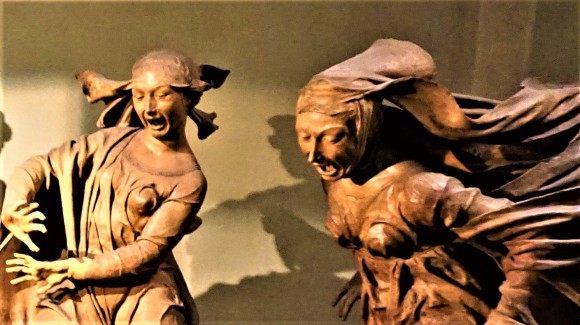 And on that note, I’ll close this post with this final thought: When travelling, it’s a good thing to have time to spare. However, once you arrive home, it’s heart-breaking to discover something wonderful that you missed.

Lesson learned: Next time, slow down, google it, and learn what more there is right in front of you.

Thanks for reading! Follow my blog for more posts about the details in travel far and wide.

We visited the Gordon Parks Museum at @fortscottcc last weekend in Fort Scott, Kansas. It’s a small space but chock full (maybe too full) of Parks’ monumental photos from his “American Gothic” to Muhammad Ali’s hands, to his iconic fashion photos. Also: an exhibit of replica furnishings from his New York City apartment, his writing desk, and more about his amazing career as a photographer, poet, director (Shaft, The Learning Tree) and author. He was born in Fort Scott in 1912, had an amazing international career and now rests in peace in Evergreen Cemetery just south of town. An American Treasure. #gordonparks #gordonparksfoundation #photography #fortscott #travel
Francie and the 35-foot tall fork in Chesterfield Village. This is either the world’s largest or second-largest fork, according to my five-second Google search. Whatever. I remember this being around the original Churchill’s Coffee building on S. Glenstone several years ago. Much harder to find now, as it’s tucked away in Chesterfield. #417 #dogs #publicart #springfieldmo
Was just watching “Begin Again” with all the great scenes shot around NYC, including one at Bethesda Terrace in Central Park that @_katherineyung and I visited on our awesome trip in March 2019. Ahhh… memories!
Did you know there’s a “poets district” in Kansas City? In this area on a block adjacent to the @countryclubplaza, you will find several apartment buildings each named for Mark Twain, Henry Wadsworth Longfellow, Robert Browning, Robert Louis Stevenson, James Russell Lowell, and others. This is the building named for the St. Louis-born children’s poet Eugene Field (1850-1895) who wrote The Gingham Dog and the Calico Cat, Wynken Blynken and Nod, Little Boy Blue, and more. Get a load of those window boxes! 🤩
An unexpected surprise on our drive across South Dakota today. Into the Wild is one of my favorite books by my absolute favorite nonfiction author Jon Krakauer.
Thinking back to 2002 when @mitch.yung served an artists residency at @watershedceramics in Newcastle, Maine (and brought me and our two kids along!). Loved this barn and all the clay creativity it fostered. (In the last picture, our now grown kids are watching @tylergulden flip his eyelids inside out… good times!) Congratulations, Watershed, on your awesome new facilities! We loved our time here! @collinyung @_katherineyung