My daughter spent three months living in Venice in 2017 as an intern at the Peggy Guggenheim Collection, a small, yet world-renowned modern art museum located on the Grand Canal. Her time there was magical, challenging, beautiful, and life-changing. On four occasions, she day-tripped with her friends away from the 124 islands that compose Venice to visit these cities: Bologna, Padua, Verona, and Vicenza.

Since her return, we’ve enjoyed many conversations about her time in Italy. In this and future posts, I’ll be relaying the details of each of these short excursions. This post is about her daytrip to Vicenza, a city with an approximate population of 113,000 full of architectural gems that was designated a World Heritage Site in 1994.

The interview answers are just the two of us talking; see the photo captions for more detailed notes and facts about her trip.

How far is Vicenza from Venice? It’s only a 45-minute train ride that goes through Mestre, which is near Venice on the mainland and then Padua before arriving in Vicenza.

What did you do first? We first walked from the train a few minutes to the city walls. Then we made our way to the Palladio Museum. It’s a large museum situated within the Palazzo Barbarano. The museum showcases Andrea Palladio, the Italian architect who designed tons of buildings all around the city. Palladio lived in the early 1500s, so he can be considered a High Renaissance artist.

The museum has old and rare sketchbooks and drawings by Palladio. Those were so interesting. It was amazing to see how well-preserved the papers were. 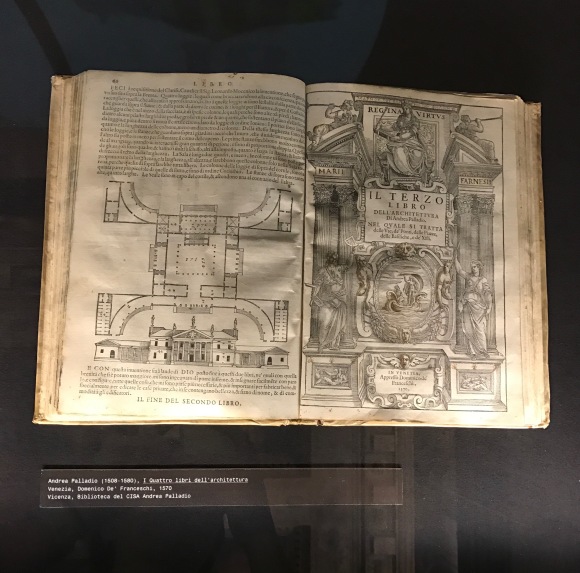 The museum is also famous for all of the dioramas they have of Palladio’s designs. These aren’t old, but they are really valuable, so anyone—and especially art historians and architects—can understand more about how the buildings were designed. You can get a sense of the effects that Palladio achieved with his symmetry, like the long views down corridors.

Was symmetry his trademark? Well, one of them, along with columns. He’s why columns are popular in homes and public buildings. Basically, his work was about highlighting classical Roman architecture, and symmetry was one characteristic. His designs influenced architecture around the world. It eventually became called Palladianism. Palladio’s work is easy to recognize because he had a very distinct style that totally revolutionized the architecture game. And lots of people are familiar with Palladianism, even if they don’t realize it. The White House and the U.S. Capitol—and thousands more examples around the world—are good examples. So is Thomas Jefferson’s home, Monticello.

Did you have a tour of the Palladio Museum? Yes, we had a guide who spent 2 ½ – 3 hours showing us the museum, which was our main goal in visiting Vicenza. There was an exhibition being shown there called “The Mysteries of Palladio’s Face.” It was all about portraits of Palladio—or the fact that there aren’t portraits of him. No one really knows for sure what he looked like. Even drawings of him are different. However, there was a drawing we saw where he had actually sketched his hand onto the paper. Kinda cool because at least we know it’s his hand, y’know?

You were there such a short time. Did you miss anything? The Villa Rotonda was closed when we were there and that’s one of Palladio’s most famous and influential works. It’s a square building with four entrances, one on each side. It’s one of the most recognizable structures of the Renaissance.

What did you do after the Palladio Museum? After that, we walked around downtown to see some of the other buildings. There’s a whole street in Vicenza called Corso Andrea Palladio… it’s lined with multiple palaces and buildings that were at least designed by Palladio if they were constructed during his lifetime.

On the interior, parts of it plays tricks on your mind due to optical techniques. For example, it appears that the set is very deep based on the perspective you see through the entrance with the blue sky beyond. The ceiling of the theater is painted like the sky and it’s encircled by large-scale Olympic figures.

What else did you see on such a short trip? We went and saw the Basilica Palladiana. It’s a building downtown that you can easily identify because of its copper roof. They issued a contract to Palladio in 1549 to renovate the building because of structural problems that occurred over the years. Today, there are restaurants and shops around it, plus exhibition spaces for art and architecture shows. One thing that makes the basilica significant is that it shows the first example of the Palladian window. Palladian windows have a center window with a semi-circular top and then one rectangular identical window on each side.

After going to the basilica, we decided we wanted to have lunch outside on the plaza, the Piazza dei Signori. We found a quaint café in the sun and… wait for it… had some pizza that was altogether forgettable. It was more like American pan pizza. I’m sure some people liked it, but I was disappointed. I didn’t even make a note of the name of the place. Oh, well. That was literally the only downside to the whole day. I would love to go back!

How would you sum up Vicenza? It’s a quiet city with an off-the-beaten-path feel to it. It’s very beautiful and important. It’s like a giant art museum, but the art is the city itself.

I make no apologies. As a writer and parent, I feel perfectly entitled to take full advantage of my daughter’s experiences in Italy by wringing every possible story idea from it! Yes, our family did visit her in Venice for a week, and while we saw so much in that time, we envied the luxury of time her three-month internship allowed. Check out my profile on Medium.com and find more stories about my daughter’s other daytrips around northern Italy.

6 replies on “Vicenza, Italy: where the art is the city itself”

Fantastic! Thank you for the cultural vacation you and your daughter just treated me to!!! Great photos and commentary :)) :)) Dawn

Thank you! I am working on getting my post up about her trip to Verona. One for Ravenna is coming and then Florence. Thanks for reading and commenting!

My older sister studied Art History in Padova back in the early 70s, on a program from UCLA. She met her husband there, brought him home to the States, and they now live in Malibu. (She works with the Getty Museum :)) You never know where studying in Italy might take you!!! :))

Wow! The Getty! My daughter is applying for grad school and another internship. Also interning at a local museum. Museum education is her goal. Thanks again! What school in Padova btw?

Not sure, but it was associated with UCLA. Your daughter sounds wonderful :)) Check out my daughter, EllaHarp — she’s amazing too :)) :))

Will check out the link 🙂

The Slice of Life Poem