From a distance, she looks pretty good.  But there’s more to her story. 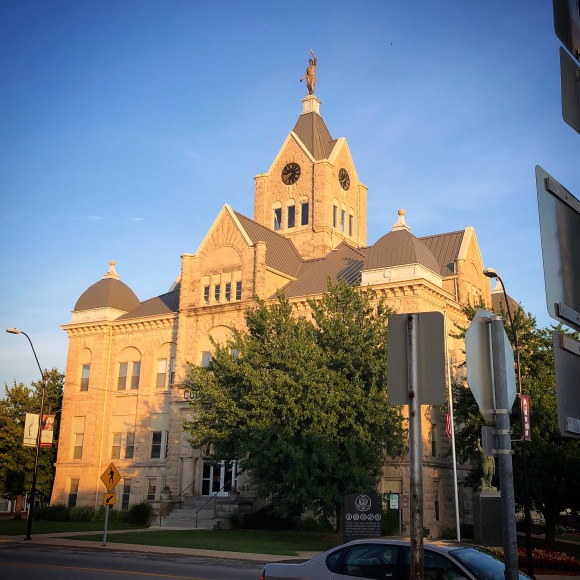 I took this photo last fall of the Polk County Courthouse in downtown Bolivar, Missouri. I’ve always thought the statue of Lady justice on top appeared unusually large. In fact, she is about thirteen feet tall (six feet shorter than the Statue of Freedom that tops the U.S. Capitol) and was placed on the building when it opened in 1907, according to the Bolivar Herald Free-Press. The statue is hollow and is supported by an 8-inch by 8-inch oak beam.

From a distance, she looks pretty good.  But there’s more to her story.

In her earlier years, Lady Justice held a sword that was 5-1/2 feet long in her right hand. In her left hand were the scales of justice. Unfortunately, time and the elements have removed both.

In 2001, someone found the sword  on the courthouse lawn; strong storms and winds had pulled it down. It had likely been weakened by a crack in one seam on the handle, according to this article. There are no plans to replace either the sword or the scales, since they are difficult to attach and maintain.

There are also no plans to fix other damages—such as bullet holes— to the statue. Long ago, pigeons perched on and around the statue and some locals decided to keep the birds in check. As a result, Lady Justice is riddled with holes, including one on a big toe that’s since been repaired, and another hole right between her eyes, a commissioner said.

So there Lady Justice stands… empty-handed, full of holes, and obscured by her great height. Yes, it’s lonely at the top.

Thanks for reading! You can travel around the world or you can travel in your own backyard. It’s how you look at what’s around you. Click “like” and become a follower for more travel stories.

Francie and the 35-foot tall fork in Chesterfield Village. This is either the world’s largest or second-largest fork, according to my five-second Google search. Whatever. I remember this being around the original Churchill’s Coffee building on S. Glenstone several years ago. Much harder to find now, as it’s tucked away in Chesterfield. #417 #dogs #publicart #springfieldmo
Was just watching “Begin Again” with all the great scenes shot around NYC, including one at Bethesda Terrace in Central Park that @_katherineyung and I visited on our awesome trip in March 2019. Ahhh… memories!
Did you know there’s a “poets district” in Kansas City? In this area on a block adjacent to the @countryclubplaza, you will find several apartment buildings each named for Mark Twain, Henry Wadsworth Longfellow, Robert Browning, Robert Louis Stevenson, James Russell Lowell, and others. This is the building named for the St. Louis-born children’s poet Eugene Field (1850-1895) who wrote The Gingham Dog and the Calico Cat, Wynken Blynken and Nod, Little Boy Blue, and more. Get a load of those window boxes! 🤩
An unexpected surprise on our drive across South Dakota today. Into the Wild is one of my favorite books by my absolute favorite nonfiction author Jon Krakauer.
Thinking back to 2002 when @mitch.yung served an artists residency at @watershedceramics in Newcastle, Maine (and brought me and our two kids along!). Loved this barn and all the clay creativity it fostered. (In the last picture, our now grown kids are watching @tylergulden flip his eyelids inside out… good times!) Congratulations, Watershed, on your awesome new facilities! We loved our time here! @collinyung @_katherineyung
In March, we travelled to St. Louis to tour The Cathedral Basilica. How did I not know this beautiful structure is so close to home? If you ever have the opportunity to visit, you really should. Click on the link in my bio to learn more about this amazing place.

What’s Up with Meyer Wolfsheim?

3 Resources for Shakespeare in Love

Shakespeare in Love: What Not to Watch