This is our first major trip where by the time we return home, we will have utilized  AirBnB seven times! Today’s post is about our stay near the Athens International Airport with Tania and her son, Kostas (yes, another Kostas!).

Tania’s house is called “Sunny House” and it’s ten minutes from the airport, which was perfect for our needs since we were flying out of Athens the next day for five days in Crete.

Despite some communication problems between Tania and me during the day about exactly when and how we would arrive at her house, we finally met up around 4 p.m.

It had been a hectic day! We had taken a three-hour bus ride from Olympia (along the southern coast of the Gulf of Corinth), a subway transfer, and a ride on the suburbs-bound metro train. Tania could tell we were exhausted. After showing us the house, she said, “You look tired,” and she left us to rest.

However, before leaving, Tania’s son Kostas offered to handle ordering dinner for us later. We could look through the menus on the table in the apartment to make our choice, he said. After resting, we took him up on his offer and asked him to order two pork gyros from a local restaurant. In about fifteen minutes, a man on a scooter drove to our door with hot gyros in hand. Awesome!

Mitch and I ate our gyros on the sun-dappled patio table in front of our flat. It was a very warm day (some would call it hot), but with the breeze, it felt cool in the shade.

As we ate, Kostas was installing some tile around a concrete seating area on his mother’s patio. He came over and asked us if it would be all right if he cut some tile, as it would make quite a loud noise. Of course, that would be fine, we said. We didn’t want to get in the way of his project, obviously.

As Kostas worked, Tania swept leaves from her patio that joined ours. In front of her home, four trees provide lemons, oranges, apricots, and olives. She told us to help ourselves to all the apricots we wanted as there were simply too many to pick. We picked about six and carried them back to our place. Lucky for us that we’ve visited Greece during apricot season. (I never buy them at home because they’re rarely allowed to ripen on the tree.)

After eating and resting some more, we both wandered outside to see Kostas’ tile project up close. As we spoke with him, Tania came out from her home.

“Sit, sit,” she said. Taking her cue, the three of us joined her around her wooden picnic table.

As the breeze stirred, we got to know each other a bit. 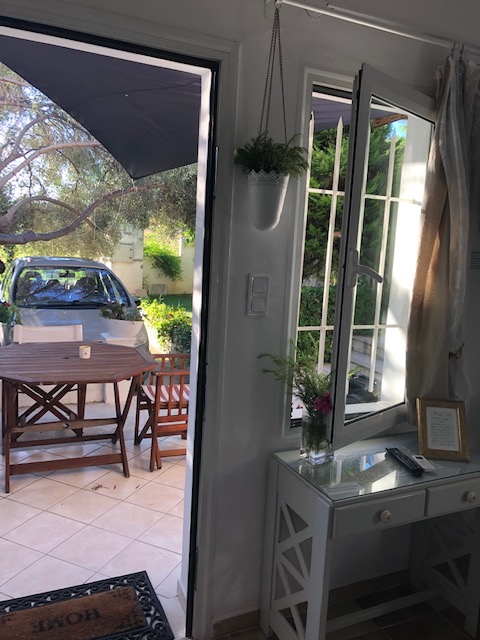 Gradually, the clear night sky darkened. The sound of a flight taking off or landing could be heard in the distance and Tania rose from the table. About five minutes later, she returned with forks and plates of watermelon wedges.

We continued to talk and it occurred to me what a generous mother and son we had met. Both were eager to share about their lives and learn about ours. We told them about our daughter, who was returning to the U.S. from an internship in Italy, and our son, a college student studying photography and video production.

They were curious about Mitch’s familiarity with farming, raising livestock, and chickens. They were especially intrigued when they learned that Mitch even raises specific chickens for their feathers, which he uses to tie flies for fishing.

We also relayed to her details about some of our other AirBnB stays from the previous few days. One of those stays was actually a room in a small hotel. While it was a pleasant stay, it wasn’t quite the traditional AirBnB experience. People who choose AirBnb don’t want a hotel, Tania said. They want the experience of meeting local people.

Eventually, the conversation waned and a few yawns were heard. We all decided to call it a night, but before doing that, we went over our morning plans: Tania would taxi us to the airport at 7:30 in the morning so we could make our 9:15 flight to Heraklion, Crete.

With that confirmed, I asked if I could take a picture for my blog and, of course, they agreed. Kostas offered to take the picture. His long arms are good for that, he told us.

We thanked Tania again for the watermelon and wished Kostas well with his studies.  And with that, we turned in for the night.

One reply on “Scenes from a sunny house in Athens”

[…] okay. I’m sitting on this gray metal bench waiting for a train to whisk my husband and I to our AirBnB in Paiania. As I stared at the departure sign’s red digital numbers, I noticed two security guards casually […]

The sonnet for high school: (part 2)

Hexagonal Thinking and The Great Gatsby