From golden goblets to frying pans to perfume

On our next to last day in Greece last summer, we capped off our Greek museum tour with a visit to the National Archaeological Museum in Athens. It was the last museum we would see, having already visited other museums in Athens (The Acropolis Museum), Mycenae, Delphi, Olympia, and Heraklion. You would think that we would have been “museumed out,” but actually each museum is so unique to its location that each one feels quite different from the others. 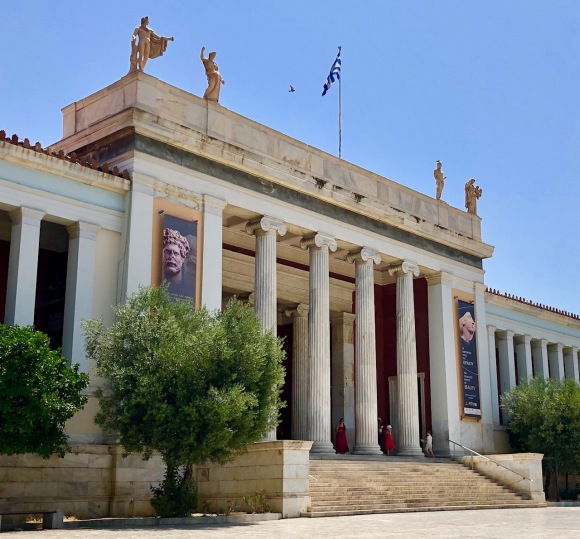 So what sets the National Archaeological Museum in Athens apart from the others? In a word, I would say “breadth.” In fact, you will find the widest gamut of Greek artifacts and art. This museum has pieces from all those other areas we had visited across the country, in addition to hundreds (possibly thousands) more.

By the way, here’s a list with links to posts I’ve written about the other museums we visited in Greece:

For example, when we visited the Museum of Mycenae, the golden Mask of Agamemnon that was discovered in a grave circle there, was not held in that museum.

The mask on exhibit in Mycenae is a replica,  a guard told me. The original could be found in the National Museum in Athens, he added. Upon hearing this, we made a mental note to seek out the mask when we would eventually tour the National.

Watch this video from Khan Academy for more about this mask.

When one visits a museum in Greece, you truly feel that you are in the hub of antiquity. Each museum is an art historian’s dream;  art history students will also be amazed at seeing in person so many famous works commonly found in textbooks.

This description of the National Museum can be found on the museum’s website:

“The National Archaeological Museum is the largest museum in Greece and one of the most important in the world. Originally destined to receive all the 19th century excavations, mainly from Attica and other parts of the country, it gradually took the form of a central National Archaeological Museum and was enriched with finds from all parts of the Greek world. The rich collections, enumerating more than 11,000 exhibits, offer the visitor a panorama of ancient Greek culture from the prehistory to the late antiquity.”

Here’s a listing of the various collections within the museum: 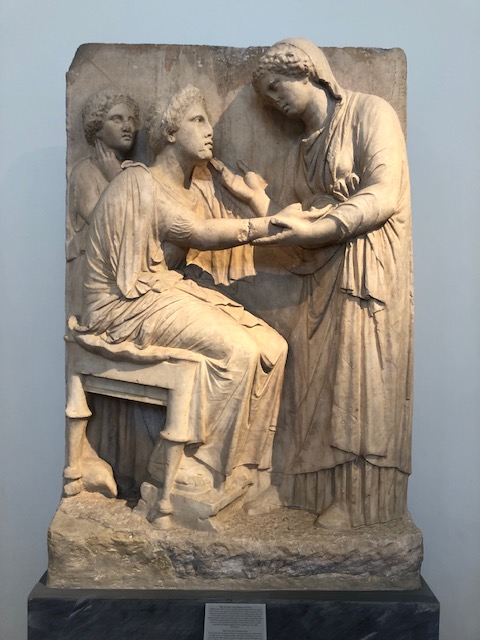 Visiting the National Museum in Athens was our final stop of our five-week Greek odyssey. We left Athens at 6 a.m. the next morning, for a short layover in Amsterdam, and then Atlanta, and then finally to our home airport in Springfield, Mo.

Thanks for reading again about our travels in Greece this past summer! Now that we’ve both started new jobs and are in the full swing of new school years, this trip seems like a lifetime ago. However, there are still posts to be written, and I’ll get to those eventually. My next one will likely be about the Jewish Ghetto in Venice, which I was able to see briefly during my week-long stay there in June.

Now that the year is beginning to wind down, I also hope to write soon about “2019… My Year of Living Changerously” and how I managed to stay buckled up and on the tracks.

6 replies on “The Zeus of Greek museums: Our visit to The National Archaeological Museum of Athens”

Thank you for reading and commenting!

[…] enough to take the time to see this incredible site. Follow my blog for more travel stories from Greece, including Skopelos and Crete, as well as Italy, including Venice and other […]

[…] members and grave goods. Those goods can be found at the National Archaeological Museum in Athens. Here’s my post on that museum. This circular enclosure was an updated feature added to enhance the royal burial ground. When was […]

[…] its golden handle. Today, this sword is kept in the National Archaeological Museum in Athens. Read this post about the […]

Visited @countryclubplaza last weekend for the annual Thanksgiving night lighting. So many beautiful Sevilla-esque towers!
It’s always interesting (and groovy) at @hakaarsbazaar on Commercial.
Art, art and more art at the Kansas City Plaza Art Fair 2022
We visited the Gordon Parks Museum at @fortscottcc last weekend in Fort Scott, Kansas. It’s a small space but chock full (maybe too full) of Parks’ monumental photos from his “American Gothic” to Muhammad Ali’s hands, to his iconic fashion photos. Also: an exhibit of replica furnishings from his New York City apartment, his writing desk, and more about his amazing career as a photographer, poet, director (Shaft, The Learning Tree) and author. He was born in Fort Scott in 1912, had an amazing international career and now rests in peace in Evergreen Cemetery just south of town. An American Treasure. #gordonparks #gordonparksfoundation #photography #fortscott #travel
Francie and the 35-foot tall fork in Chesterfield Village. This is either the world’s largest or second-largest fork, according to my five-second Google search. Whatever. I remember this being around the original Churchill’s Coffee building on S. Glenstone several years ago. Much harder to find now, as it’s tucked away in Chesterfield. #417 #dogs #publicart #springfieldmo
Was just watching “Begin Again” with all the great scenes shot around NYC, including one at Bethesda Terrace in Central Park that @_katherineyung and I visited on our awesome trip in March 2019. Ahhh… memories!